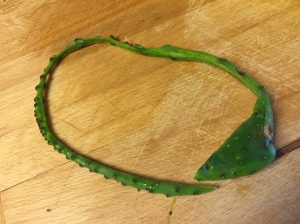 Removal of outer edge and woody area at base.

Prickly Pear in the wild.

While DH, MIL and I were out in Tucson, Arizona a couple of years ago, my Sister-in-law requested that we buy prickly pear paddles and ship them to New Jersey so she could make a sauce from them at Thanksgiving. Her theme was going to be all about the Southwestern USA. This was brought about as She and her DH had purchased a house in Tucson which they would be retiring in. So we went out there to see her new house and tour the area. We went to numerous supermarkets and specialty foods outlets, but no paddles. So after going to numerous stores and not finding the paddles, MIL called home to have my sister-in-law send the actual name. That is when we realized that MIL had been having us look for the wrong thing. Even the fruit was hard to come by, but we finally found some. MIL made the arrangements to ship them home which cost about $45. in shipping. They arrived in good condition. After we got home back to New Jersey, I went to our local grocery store, and there in the produce section were the paddles and the fruit.

So since I tasted the fruit of the prickly pear, I decided to taste the paddle as well. I watched a video on the Internet on how to clean and cook them. Even still I managed to get stuck with one of the thorns. I tasted a raw piece of the cleaned paddle. It was crunchy with a clear slime textured juice, and wasn’t bad at all. I could see tossing it into a salad. I then cooked the rest of it which caused the slime to be even more abundant. It reminded me of my experience with okra when I was a kid. If I was starving or out in the desert in need of nourishment, then it is good to know that these are edible and contain moisture. But otherwise, these are not my cup of tea.