Featured photo above by ©2017, Deborah Kaplan

I normally don’t eat breakfast unless we are traveling in our RV. Mostly, I only drink coffee in the morning. I do however love the following breakfast foods: Belgian waffles, creamed chipped beef, pork-roll, spinach feta omelette, deep fried French toast, pan fried French toast, bacon, maple sausage, fried matzo and pork Scrapple, and DH’s dead scrambled egg concoction. I personally rarely cook breakfast, as that job is designated for DH. He will ask me if I want breakfast and normally, I say no, so he will make something for himself. So this was probably a shock to his system and on Mother’s Day too boot. I saw a photo on a popular photography site, but when I clicked on it, there was no recipe on the redirect. So I decided to experiment myself.

My version was made with ingredients I had on hand, since I only decided to make this at 1:00 AM on the wee hours of Mother’s Day. I had cinnamon swirl bread, chocolate chip brioche buns, whole milk, cinnamon, vanilla extract, butter, chocolate chips and eggs. I also have a 6-quart slow cooker. 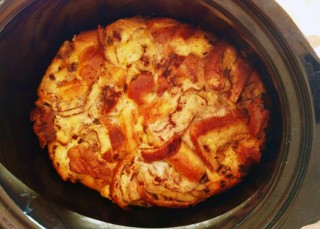 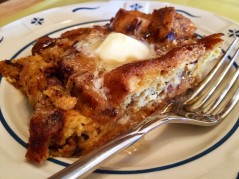