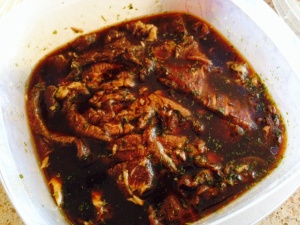 DH and I love jerky, and for me, most store bought ones are either too salty, or way too expensive. When we were out in Tucson, AZ back in November 2011, DH bought the best non-salty jerky we had ever tasted. It was sold at a convenience store in a tiny town no more than a crossroads on the Western side of Saguaro National Park. The jerky sold there was sliced extremely thin and the slice of it was 12″x12″ if memory serves me. And the flavor he bought was a sweet teriyaki flavoring. Actually not something we expected to fine in the Southwest. DH does not like spicy foods so we were pleasantly surprised. Of course we have been trying to replicate the experience back home in NJ. And this recipe I came up with fits the requirements taste wise. I have added an optional heat to it, for those who like their jerky to kick them back. 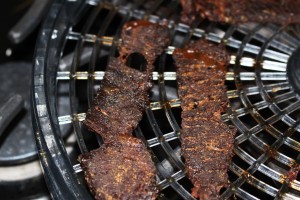 1 thought on “Beef Marinade for Jerky”